Remember that the pharaoh charged all of his people at the end of Ex. 1 to kill the sons of the Hebrews. The woman from above had a son and quote ‘when she saw he was a goodly child, she hid him three months.’ I wonder what would have happened if the kid had had something wrong, probably wouldn’t have been hidden I’m thinking.

And guess who finds the child? The pharaoh’s daughter.

Who is v.7 speaking of? It says, ‘then said his sister to Pharaoh’s daughter…’ who is the male? The story only talks of the daughter, her servants, the mother and the sister, and of course the baby boy being at the river. I could concieve that it is speaking of the baby’s sister; one of the servants. This could be the reason that when the pharaoh’s daughter calls for a milk maid, the child’s actual mother is chosen; because it is that servant girl’s mother too.

Pharaoh’s daughter gets a Hebrew woman to nurse the baby for her who turns out to be the child’s actual mother. Apparently the name Moses means to come from the water from what the Pharaoh’s daughter says in v.10. 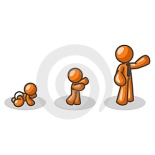 We don’t know how much time passes between v.10 and v.11 but he must then be in his teenage years judging by his actions in the rest of the chapter.

Moses is grown and joins his brethren, likely working under the slave drivers, when he sees an Egyptian ‘smiting’ one of the Hebrews. When he saw the Egyptian alone and that no one was looking he ‘slew’ him and hid his body. Premeditated murder, pretty wrong but no response from god.

The next day he returned to the work site to find that two Hebrews had been placed in charge of the slaves and were treating them just as the Egyptian had. Moses confronted them asking why they would smite their brethren. One of them responds asking who made you boss basically and asked if Moses was going to kill them just like had killed the Egyptian the day before. Moses got scared knowing that it was known that he had been the one to kill the guy so he fled to Midian. It pretty clearly states that the Pharaoh was angry at Moses and Moses fled ‘from the face of Pharaoh.’

In Midian Moses was sitting by a well when seven women and their flocks came to get water. Some shepherds came and took over the well and tried to shoo the ladies but Moses stood up to the shepherds and drew the water from the well for the women.

When the women returned to their father Reuel and told him the story he told them they should have brought Moses with them for the good deed. Within the same verse, v.21, Moses moves in and receives Zipporah as his wife and then his son Gershom is born in v.22.

‘…in process of time,’ the Hebrews in bondage in Egypt sighed because of the bondage. OK, they didn’t complain about the slavery until now? Anyways, they cried to god to release them. It says then that god remembered his covenant with Abraham, Isaac, and Jacob and he looked unto the children and had respect unto them. I thought god saw everything, did he not see them in slavery all this time? Did he forget his covenant until now?

Exodus 1 – Israelites Multiply and are Enslaved

The story of the life of Joseph and his brothers is wrapped up pretty quickly in v.6.

We are told that the generations of the children of Israel become more numerable than the people of Egypt. The timeline of BibleHub gives about 100 years span between the death of Joseph (1800 BCE) and the enslavement (1700 BCE). Think about that in a mere 100 years the Israelites go from about 70 people (v.5) to outnumbering the Egyptians (v.9).

v.8 talks of a new king coming to power in Egypt who doesn’t know Joseph. It doesn’t say how many kings have taken the throne since the famine only that this is the king who didn’t know of Joseph. Two things must be questioned:

1-Similar to Jacob/Israel, why is this king called king and not Pharaoh? The most likely answer is that the word Pharaoh is an anachronism. It is the title that WAS used for the ruler of the Egypt but we must look at the fact that the title wasn’t in use until about 1400 BCE.

2-How does this ‘king’ not know of Joseph? Joseph saved the country from a seven year famine with a dream interpretation and was placed in power over all the land. Even if the king hadn’t met Joseph in person, he would be familiar with the story of that person, its only been about 100 years after all.

The new king warns his people that if the Israelites continue to multiply and they side with an enemy that Egypt would fall. As a result the Egyptians enslaved the children of Israel. Is it correct to think now that the ratio of slaves per capita is greater than 1:1? The population of slaves is greater than the population of the country of Egypt? That would definitely be something that would be recorded in history in more than this single source, but in fact it can’t be found in any of the records of the Egyptians.

The lives of the children of Israel were made rough, it says everything they were made to do they had to do with rigour. In this instance the bible speaks of the harsh parts of servitude that were never covered when it was the Hebrews that had the slaves.

It seems that he was trying to keep this little bit of infanticide under cover if possible but the midwives wouldn’t listen to him so he had to make it public. Perhaps this is why he didn’t punish the midwives more than talking to them as we would expect him to.