WAR OF THE WORLDVIEWS

No one comes to these discussions completely neutral or objective. In other words, reason isn’t always reasonable. Our reason can be compromised by our own selfish motives.

I actually agree with what the author says here. If you remember (from Introduction – Ground Zero of Faith) I commented that just because you can logically reason an result to a problem or argument doesn’t mean that answer is true. In context, the author is talking about the atheist being unreasonable but the argument is just as suitable to the Christian argument.

People who act corruptly or destructively may think they have reasons that justify their actions.

The instant I read this sentence I could only think of the flood from the Bible, I wonder if the author thought of that.

On top of that, they have a way in which they view the world. Their worldview consists of a set of presuppositions that bias reason. 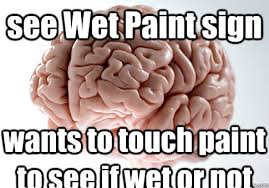 Accepting any and every claim until it has been disproved would be irrational, illogical, and potentially dangerous. It is maddening the number of times the author attempts to shift the burden of proof to the nonbeliever in this book. The default position on any claim is disbelief until it is sufficiently proven. For example: the size and shape of the Earth, the top of the stove being red means its hot, or that drinking battery acid won’t hurt you.

Just as we desire intimacy, trust, and love from the relationships we value…

This sentence is a very good representation of how I the start of religion in general. The reason deities were ever imagined; to feel intimacy, trust, and love in this vast unfeeling universe of ours. Imagine being back in the infancy of the human race, a group of hunter/gatherers attempting to make sense of the world around them, a loving deity fills that spot perfectly.

The author again (and again) inaccurately defines the term atheist. Although “A- is the Greek prefix meaning ‘abscence,'” is true, “therefore an atheist believes in the absence of God” isn’t fully.

This worldview eliminates the possibility of God from the outset; therefore, no evidence for an intelligent Creator will ever be convincing.

This, I think, is the author knowingly being deceitful about the position the atheist holds. Most atheists today do not make the claim that no god could ever exist. That is called a positive claim and would place the burden of proof on that person. Atheists simply don’t accept the claim made by believers that the specific gods in today’s cultures exist. The argument isn’t a simple two sided coin, it is more complex than that.

Look at the picture below. There are an even number of gumballs in the machine. 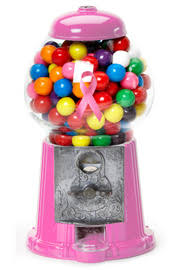 What was your first reaction to my saying there was an even number of gumballs in the machine? Likely disbelief or at least skepticism. How could I know how many gumballs are in that machine. Does the fact that you didn’t completely agree with me then mean that you believe there to be an odd number of gumballs? No, of course not. You stand between the two decisions until there is evidence for one side over the other. This is the position of the atheist today. We stand unbelieving in any god until the evidence is provided to prove its existence.

To say that nothing exists outside the physical world is a statement of faith. There is no way that anyone can prove that is true.

Again with the shifting of the burden of proof. I really don’t want to rehash this every time the author presents a fallacious burden of proof argument but I must. The only thing we know is the physical world. The claim about things outside of nature (or “super” natural) come from the religious, not from science, and as such don’t have to be disproved. They need to be proven first.

Ending the chapter, the author brings back two of his favorite communities to explain how bad atheists are, the Communists and the Nazis. I will agree that these people were bad but it wasn’t because they were atheists. They were bad and they were atheists, I sincerely hope you understand the difference in these two statements. On the other hand, the crusades were bad and happened because the followers were religiously motivated. My comment written in the book is the way I’ll end my comments on this section in my own little quote box.

An atheistic worldview has no doctrine or dogma that is demanded of its adherents as a religion does. It makes no statement about how you should act, only about the reality of the existence we share.

This is me. Check out the topics and pages at the top of this page. Thanks for visiting, leave me a comment, share a post, follow the blog, whatever. Thanks for reading, come back soon for more.
View all posts by MDarks »

Posted on September 7, 2014, in FreeThoughts, God's Not Dead. Bookmark the permalink. 1 Comment.